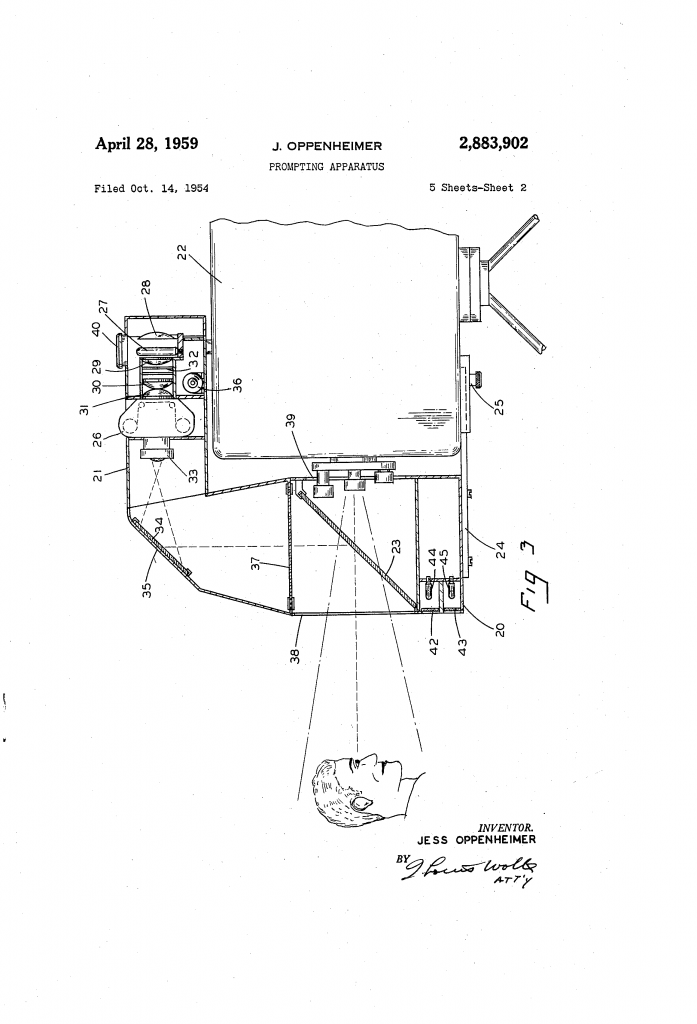 According to Bobby Ellerbee:

Lucille Ball liked to call Oppenheimer the brains behind ‘I Love Lucy’. As series creator, producer, and head writer, Jess was the creative force behind the show. According to Lucy director William Asher, “he was the field general. Jess presided over all the meetings, and ran the whole show. He was very sharp”.

Sharp indeed…he also held 18 patents, including this one linked above. Although teleprompters were not used during the filming of the main body of the ‘I Love Lucy’ shows, Lucy and Desi did use them when filming the opening commercial spots. From the show’s start in 1951, they used the paper roll model mounted above the camera lens, but Oppenheimer did not like the way that looked on camera.

The first reported use of this “through the lens” system was by Lucille Ball and Desi Arnaz, for a filmed Philip Morris cigarette commercial which aired on ‘I Love Lucy’ on December 14, 1953 in the second year of the show.

As you can see in the diagram, there is a small projector atop the rig which sent televised images of the copy to a transparent reflective surface in front of the lens. At first, copy was typed and loaded on a regular RCA paper roll teleprompter with a television camera shooting that and feeding it via coax to Oppenheimers device.

Later, a system was developed that used regular, long teleprompter paper on a horizontal moving belt under a small TV camera and fed via coax to one or more prompters in the studio. Thanks to Chris Clementson for the patent info.