Television: Visual Storytelling and Screen Culture has been called the “best textbook on television available today” (Ellen Seiter, USC). Its main goal is to encourage readers to think critically about TV. Written by Jeremy G. Butler and originally published in 1994, its fifth edition was released in February 2018. (Editions one through four were subtitled, “Critical Methods and Applications.”)

The new edition goes deeper into new forms of visual storytelling in an age in which screens have proliferated, although it still accounts for TV’s functioning in the network era. Amanda D. Lotz—one of the foremost authorities on television change in the 21st century—has contributed a new chapter on the post-network era. 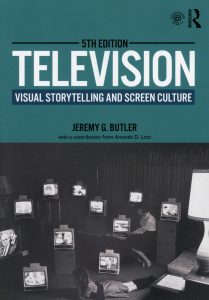 Videography, editing, acting, set design, lighting and sound are analyzed and explained in terms of how they are used to tell stories, present news, and sell products to TV viewers.

This student-friendly text provides critical and historical contexts, discussing how critical methods have been applied to the medium and highlighting the evolution of television style through the decades.

Television is illustrated with hundreds of screenshots from TV programs. A companion Website, hosted by Routlege, presents color versions of these black-and-white figures and augments them with video clips, sample student papers, syllabi, and other material. It will soon be available at:

Highlights of the fifth edition include:

With its distinctive approach to examining television, Television is appropriate for courses in television studies, media criticism, and general critical studies.