I recently completed a book on the sitcom for Routledge. My previous book project, Television Style, was also published by Routledge (2009).

I've edited one anthology, Star Texts: Image and Performance in Film and Television, and published articles on Mad Men, ER, Roseanne, Miami Vice, Imitation of Life, soap opera, the sitcom, and other topics in journals such as Cinema Journal, Journal of Film and Video, and Screen. (Read more about research activities.)

For some time now I've been active in online educational resources for film/TV studies. I created Screen-L and ScreenSite, two of the earliest Internet resources for film/TV teachers/students; and I served as the Society for Cinema and Media Studies' first information technology officer. (Read more about online and media projects.)

In addition to my duties as a film/TV educator, I also host a weekly radio program, All Things Acoustic, on Alabama Public Radio. And I maintain an online gallery of photographs I took in the 1970s: The 1970s in Black & White.

This site is not hosted by or approved by the University of Alabama. 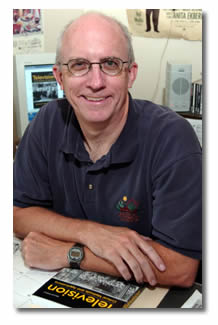