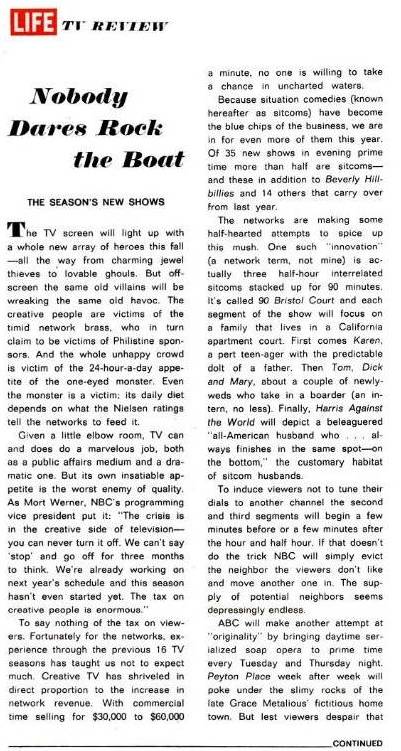 Tracking down the etymology of the phrase “situation comedy” and its abbreviation to “sitcom” is difficult. The Oxford English Dictionary points us to a 1964 Life magazine article by David Martin and the sentence, “Even Bing Crosby has succumbed to series TV and will appear in a sitcom as an electrical engineer who happens to break into song once a week.”[1]

But this sentence is not even the first reference to “sitcom” in that particular article. An earlier page (21) contains the following: “Because situation comedies (known hereafter as sitcoms) have become the blue chips of the business, we are in for even more of them this year. Of 35 new shows in evening prime time more than half are sitcoms—and these in addition to Beverly Hillbillies and 14 others that carry over from last year.”

Should we believe that Martin coined “sitcom” in 1964 or was his use of it in a popular, consumer magazine just an indication of its widespread use in the TV industry by that time? The answer is unclear and I have not been able—so far—to track “sitcom” down in Variety or other trade magazines. My friend Lang Thompson, however, did find a piece in the Chicago Tribune that suggests that 1964 was about the time when “sitcom” emerged from industry discourse into popular speech. Columnist Larry Wolters writes, “A score of situation comedies (they call them ‘sitcoms’ in the trade) have arrived and more are ahead.”[3] Wolters’s comment suggests that “sitcom” was still a new term to his readers, but not a term he himself (or Martin in Life) coined.

The origin of “situation comedy” is no clearer than that of “sitcom,” but it is evident that it was in use way before 1964. In fact, a 1947 Variety article proclaims, “Gag comedy [radio] programs still rate over farce situation or realistic situation comedy shows, judged by a survey of the season now closing. As for gag shows, the ‘broad smart comedy’ type has a far greater appeal than the ‘broad corny comedy’ types.”[2] I must confess that at this stage of my research I cannot explain what distinguishes farce situation comedy from realistic situation comedy, but, nonetheless, it’s obvious that comedy based on narrative, on situation, has long been contrasted with comedy deriving its humor from gags (and a loose or nonexistent narrative).

In fact, situation comedy was so well established on radio and TV before the 1950s that it was in danger of wearing out its welcome. No less a comedian than Bob Hope could argue, “Situation Comedy Becoming Extinct…” in a 1955 Variety issue.[4] TV History teaches us just how wrong he was.

Note also that Hope contends—in 1955!—that “a sameness surrounding most situation comedy formats have [sic] brought about their decline, that while tv viewers didn’t mind it so much a few years ago, today [1955] they are more demanding and selective.”